This page is for organizing all important ideas about Avatar Extension in one place.

For an experimental implementation, see Avalog.

This means that (a, b) contains all information needed to represent a labeled edge.

Avatar Graphs might be thought of as discrete topological qualities of manifolds.

The “core self” is an object which has no internal relations for introspection. Avatars are created to model relations.

Information must be passed down from higher avatars in the direction of the core. An Avatar Graph “forgets” which node is the core.

A filled Avatar Graph consists only of core candidates.

A reflection witnessed by a product (x, x) is impossible to model in an Avatar Graph. This means that a “copy” of x must be constructed, which eventually requires copies of 1-avatars. Translated into a theorem about Avatar Extensions, this means 1->1 avatars “covers” products.

The core axiom of Path Semantics can be naively modeled in Avatar Logic as following:

This propagates products from every identity morphism using outgoing arrows. Adding this axiom to Category Theory collapses a category into a partial groupoid. It is kind of like extending a square matrix. Can also be thought of as a compact representation of an equivalence class.

The analogue for isomorphisms (without identity morphisms) constructs the following way: 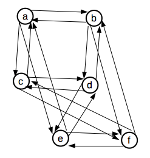 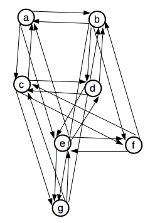 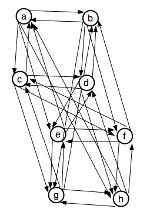 Step 1 is the smallest possible example of a Möbius topology.

In Path Semantical Logic, propositions are separated by levels, which gets rid of Möbius topology. Applying the core axiom to a single level would contract all propositions along implications, because of reflexivity x = x is a tautology.

In the language of graphs, it is possible to avoid contraction in a single level since identity morphisms are not necessary.

For example, Girard’s paradox is avoided in type systems by using cumulative universes or types. The highest N-avatars in this context are morphisms between type levels, which are just type memberships. Therefore, Type Theory is essentially a highest N-avatar reduction to make modeling of mathematics consistent.

The diagonals on a cube can be thought of as swap operations, which generates all permutations by selecting a face + rotation in the plane: 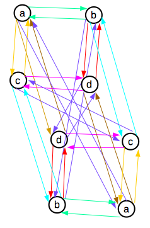 This interpretation is the only one that preserves structure.

Group Theory might be thought of as operations on highest N-avatars satisfying the notion of “resources” in linear logic.

Witness Duality can be thought of as two different models of equivalence.

Normally, = is used for equality and ~= for existence of isomorphisms, but for Witness Duality this depends on the interpretation. However, the Product Witness can not distinguish between multiple isomorphisms, while the Loop Witness can not express the global constraint of an equivalence relation.

The analogue of the Univalence Axiom says that Witness Duality can only be witnessed with a Loop Witness:

Symmetry Forcing, a property where proofs of reflexivity requires an isomorphic reconstruction, is related to the Product Witness.

These two theories are cocategory of each other, where morphisms are type memberships.

The first theory satisfies univalence, while the second does not. However, by applying avatar extensions using univalence, one can unify these two theories, by introducing a “special type membership” for which univalence holds, as a kind of proof of transitivity.

The Interior is constructed using a core with an identity morphism as a “ground state”, getting topological properties via Product Witness (due to Symmetry Forcing).

The Exterior is constructed using a loop onto the identity morphism with a 1-avatar extension as the Loop Witness. This is related to exterior algebra.

Philosophical argument about self-referential Avatar Extensions as the interior:

Avatar Modal Subjectivity can be thought of as guarded dialetheism as a technique for language boundaries.

The full experience of an observer in a given moment can never be repeated in practice. To model this phenomena, one can think of an infinite time counter, forever increasing. A time counter is monotonic, hence approximations to subjective experiences are thought of as having a weak monotonicity property.

For example, witness duality implies that it is impossible to talk about/define objectiveness without self referentiality.

In theories concerning weak monotonicity, the product of uniform and non-uniform subjectivity can be simplified:

Some kind of paradoxes are related to Möbius topologies in Avatar Graphs. These graphs can be transformed into orthogonal mathematical objects using topological surgery.

For example, a Wagner graph can be transformed in a 3-cube graph.

The topological surgery operation is an involution and relates uniformity of paradoxes with non-uniformity of tautologies.

With self referentiality, it is easier to visualize the involution.

The second sentence is related to the first one using involution on “this sentence is X”.

The Liar’s paradox offer no potential for non-uniform subjective experience.

Witness duality: In the tautology, an observer can experience one interpretation and later reinterpret it in future experiences, but it is impossible to reinterpret the original experience.

Inside vs Outside Theories form an underlying structure that integrates Kent Palmer’s (Ph.D) Schema Theory.

Definition of an Inside Theory:

Inside Theory is covered by the core axiom of Path Semantics using strictest order.

Definition of an Outside Theory:

A hypothesis is that Outside Theory is related to weakening the order assumption in the core axiom of Path Semantics.

For philosophical argument of Inside vs Outside, see the blog post Plato’s Cave Found in Mathematics.

Definition of Formal and Semantics:

This is sufficient to prove the Gödelian pair:

A proposal of Outside Theory cover is to use the core axiom of Path Semantics with weakened order, in combination with Avatar Extensions.

There are 13 satisfied models of the axioms:

⊻ is just coherence that is both Inside and Outside. ⊥ is absence of all properties which is neither Inside or Outside.

Maximum mathematical languages can have at most 2 properties, given by the grammar: